From the late 12th century, Final Concords (or Fines) were a court procedure for ending a legal action by agreement between the parties. Originally this was a means of resolving genuine disputes, but in the medieval period there was no central registry to record land conveyances and help prevent fraud so lawyers used Fines by turning the land sale into a fictitious legal dispute between the parties to the sale. The Purchaser was referred to as the querent, the Seller as the deforciant or impedient.

From 1195 the procedure was that three copies of the Fine were written on a single sheet of parchment. The copies would then be separated by cutting the parchment along wavy lines as a precaution against forgery. The left and right side copies were given to the parties and the third copy, at the foot, was kept by the court. Not surprisingly the court copy was known as a ‘foot of fine’.

The bureaucratic process could mean expense, delay and inconvenience but the court copy made the agreement much harder to challenge than one recorded only by a charter. They were also democratic in that a woman could be party to a Fine. The Feet of Fines records are arranged by year and by the four law terms, Michaelmas, Hilary, Easter and Trinity. Final concords were eventually abolished by the Fines and Recoveries Act 1833.

These are abstracts from the ‘Feet of Fines’ archived at The National Archive in Kew, England relating to Bosbury. 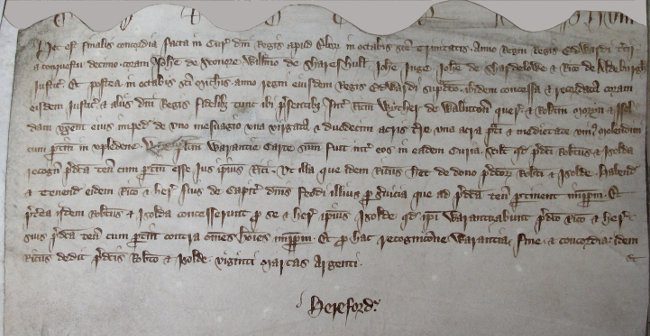 Abstracts courtesy of Chris Phillips at www.medievalgenealogy.org.uk
Particular thanks to David Strutt of Bosbury for locating the Upleadon Fine.