The Will and Inventory of William Parsons, carpenter, Bosbury, 1673

Summary:  Transcription of the original will and inventory documents of William Parsons of Bosbury dated 20th August 1673 and 5th March 1676 which are held at the Herefordshire Record Office, reference 54/1/9.

In the name of God Amen , I, William Parsons of Bosbury in the county of Hereford, carpenter, being sick of body but of perfect memory thanks be to God for it, do make and ordain this my last will testament, in manner and form following, First I commend my soul into the hands of Almighty God my maker, And my worldly goods as follows.

All the rest that I have I leave to Perrim my now wife and her I make executrix of this my will and testament, In witness whereof I do hereunto put my hand and seal the twentieth day of August in the five and twentieth year of the reign of King Charles the second, and in the year of our lord God 1673.

the mark of William Parsons 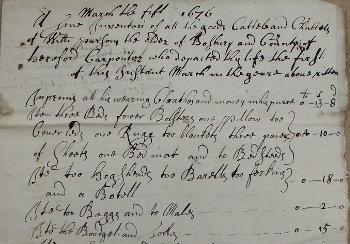 A true inventory of all the goods, cattles and chattels of William Parsons, the elder, of Bosbury and county of Hereford, Carpenter, who departed this life the first of this instant March in the year above written.

Item all manner of trind [treen?] ware and bowls and dishes and boxes     3s.

Note: His wife’s name, Perrine, has a French origin. The
male form is Perrin and both come from Pierre (Peter).