The Will of James Alcock of Bosbury, carpenter, 1614

Summary:  Transcription of the will of James Alcock of Bosbury dated 16th November 1614 listing as the main beneficiaries his children Alice, Anne, Anne the younger, John and Roger. The will is held at the Herefordshire Archive and Records Centre, reference 27/3/19. 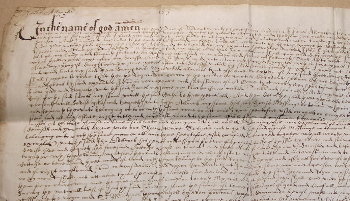 In the name of God Amen the 16th day of November in the year of our lord 1614. I James Alcock of the parish of Bosbury in the county of Hereford, carpenter, being sick in body yet none the less of good and perfect memory, thanks be given to almighty God, therefore do make and ordain this my testament containing therein my last will in manner and form as followeth. First I yield, give and bequeath my soul to almighty God, my Creator and Maker, trusting to be saved by the merits of Jesus Christ my only Saviour and Redeemer. And I commend my body to the earth to be buried in Christian burial near unto the church porch of Bosbury aforesaid where my ancestors were interred. And I do give unto the said church the sum of six shillings 8d to be paid by my executor hereafter named.

Item I give and bequeath unto my three daughters Alice the oldest, Anne the older and Anne the younger, £20 apiece. And my will it is that John, my son, shall pay and discharge the said several sums of £20 apiece to my said three daughters out of my lands and tenements situate in Bosbury aforesaid in manner and form followeth, that is to wit £6 13s. 4d. yearly unto Alice, my oldest daughter, within three years next after my decease. And £6 13s. 4d. unto Anne, my second daughter, within six years after my decease. And £6 13s. 4d. unto Anne, my youngest daughter, within nine years after my decease until the said several sums of £20 apiece out of my said lands and tenements be fully satisfied, contented and paid unto my said three daughters. Provided always that if any or either of my said three daughters shall happen to decease before the days of payment shall happen to come that then the legacy or portion of the party or parties decedent herein by me bequeathed shall be paid to the survivor or survivors of my said daughters by said executor.

Item my will is that John, my son, shall pay all my debts and legacies and discharge all my funeral expenses. And after my debts paid and my funeral expenses discharged and performed, I do give and bequeath all my goods, cattle and chattels, movable and unmovable, whatsoever unbequeathed unto John my son whom I do make and ordain the sole executor of this my last will and testament. And I do utterly revoke and annul all and any former will and wills legacies bequests and executors by me in any wise before this time made, willed, bequeathed and appointed.

In witness whereof, I have hereunto put my hand and seal in the presence of the parties undernamed