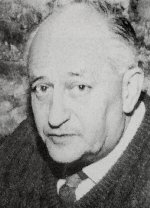 In 1926 Frederick Sharpe F.S.A. first visited Herefordshire and began making notes on the church bells.. This was the last county to have an account written about its bells and in 1966 he published the first volume of The Church Bells of Herefordshire. Abbey Dore to Little Cowarne. Frederick Sharpe was President of the Central Council of Church Bellringers from 1957 to 1963.

The detached campanile on the south side of the church contains a ring of six bells. The tenor bell is 45½ inches in diameter and its strike-note is E natural.

THE PRAYSE OF GOD I SING THE WOMAN’S KNELL I
[Bell.] 1632 [Founder’s mark 1]
[Border all round bell]
THIS BELL WAS RECAST
TO THE GLORY OF GOD
BY
JOHN TAYLOR & COMPANY, LOUGHBOROUGH
JUNE 1959
GEOFFREY GRIFFITHS
HETTY P. LANE  CHURCHWARDENS
DOUGLAS GREEN, VICAR

[Part of an alphabet written backwards]
THIS BELL WAS RECAST
TO THE GLORY OF GOD,
IN THE YEAR OF THE
CORONATION OF GEORGE VI.
MEARS & STAINBANK, FOUNDERS, LONDON.
[Whitechapel foundry mark.]

The second was recast by J. Taylor and Company in 1959 ..... In reproducing the inscription the founders omitted the word “;RlNG”. This is clearly shown on a rubbing made by Mr H.B. Walters and preserved in his collection at the Library of the Society of Antiquaries.

The third, dated 1681, and the tenor, dated 1660, are the work of John Martin, of Worcester. It is of considerable interest that the border ... which he used on these bells is almost identical with that used in 1632 on the former second, and in 1640 by the maker of the fifth, John Finch of Hereford. There is an initial cross on the tenor and between each word of its inscription is an ornamental word-stop ...

The fourth bell was recast at the Whitechapel foundry in 1937. The former bell, with its unintelligible inscription was probably cast during the stormy years of the Reformation period.

A record of the inscription on the former treble, made by the Revd. T. A. Turner on 22nd August, 1876, is preserved in the Library of The Society of Antiquaries. The bell was cast by the Gloucester foundry between the years 1783 and 1785; and bore the inscription:

The bells hang in a steel frame, installed in 1937 by Mears and Stainbank. The gear, cast iron headstock, fixed steel gudgeon, self-aligning ball bearings,traditional wheel and sliders dates from 1951 and 1959 and is by John Taylor and Company. 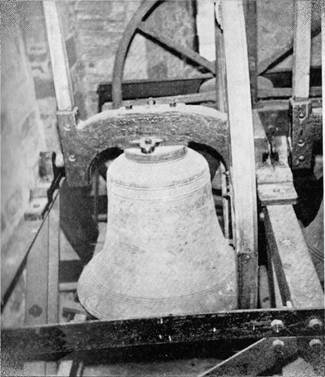 A tablet on the south wall of the campanile is inscribed:

THIS TABLET COMMEMORATES
THE RECASTING OF No. 2 BELL
AND THE REHANGING AND TUNING
OF No. 1, 2, 3, 4, 5. THIS WORK
WAS MADE POSSIBLE BY THE
GENEROSITY OF TWO PARISHIONERS.
THE BELLS WERE REDEDICATED
TO THE "GLORY OF GOD"
IN OCTOBER 1959