In 1965 Bosbury Women’s Institute produced a scrapbook of the year to celebrate the WI Golden Jubilee. These historical excerpts from this valuable village asset are reproduced by courtesy of the present WI President and Committee.

In 1965 the WI officers are: President Mrs D. Miller, Vice-Presidents Mrs. Balding and Mrs. Turner, Hon.Secretary Mrs. Hill, Treasurer Mrs. Griffiths, Committee Members Miss de Winton, Mrs. Footman, Mrs. G. Davies, Mrs. E. Davies and Miss Joyce Tooby, Press Correspondent Miss Wortley, Home and Country Secretary Mrs. Fogden and the Produce Guild Secretary Miss Tooby. In July, the group makes history by being the first block booking for the newly opened Swan Theatre in Worcester where they see “The Oxford Revue” and are treated to souvenir programmes and coffee at the interval. They have a gift stall at the Jubilee Fair in Hereford on 22nd and 23rd October and raise £200. Their “WI Baby” recorded in the scrapbook is Christopher Timothy Fogden born on 24th January at King”s College Hospital in London and arrived in Bosbury on 14th February.

In the village, 1965 is a busy year. It starts with a bus strike when Midland Red employees stop work every Saturday starting on 23rd January. From March 3rd to 5th the buses are not running anyway due to heavy snow. It is reported that post and papers failed to arrive but milk was delivered by tractor. Also in March, the prospect of a new Parish Hall is mentioned and on Monday 21st June a meeting of the Parish Hall Committee makes the decision to build a new Hall. This is reported in the local paper:

BOSBURY Parish Hall Committee were on Monday given the go-ahead to build a new hall. At a meeting in the hall the committee reported that, according to their architect, a complete repair of the present dilapidated hall — not including the caretaker’s house — would cost £7,350, towards which they could get a grant of £1,850, leaving £5,500 to be raised. To build a new hall would cost about £9,000 of which £4,500 could be found by a grant, the ultimate cost to the parish being £4,500. At present the committee had £500 in cash and had received promises of £2,500.

Before the meeting began, sketch plans of the proposed new hall were placed on the wall for inspection. Presenting the committee’s report, the chairman, Mr T. S. Hone, said they felt that to build a new hall would be the best thing for the parish. Mr Hone said it should not be beyond Bosbury, with a population of over 600, to raise the necessary money. If the meeting approved the recommendation they could go forward with an appeal. Asked about the cost of running the hall, Miss M. Lane said total expenditure last year was £195 and income £306.

Mr E. R. Lane proposed that they went ahead with a new hall and pushed the present ‘hideous’ building down. Before they went ahead, however, he though they should revise the plans. The vicar, the Reverend W. E. Green, thought the plans showed that the new hall would be a prefabricated building without a car park and would be an eyesore. Mr E. Barnes commented: ‘The biggest eyesore in the village is the vicarage.’ Mr Lane’s proposition was carried. The committee will hold another meeting when it is hoped the architect will be present. 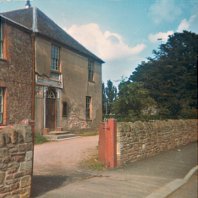 On Sunday 13th June the Bishop Swinfield Lodge of Oddfellows hold their annual Church Parade headed by the Territorial Band of the Worcester Regiment.

On 19th June four street lamps are switched on in the village and in August pipes for mains water are laid.

On a personal note, Mr and Mrs Arthur Davies celebrate their golden wedding. He served in the Herefordshire Regiment and the K.S.L.I. during the First World War, was taken prisoner in 1918 and only repatriated 9 months after the Armistice. For 30 years, he farmed at Lower House and retired to live at The Firs in 1960. Mr. Davies was active in village affairs and served on the Bosbury Show and Parish Hall committees.

Mentioning the Bosbury Show, held on Saturday 24th July this year, it has “one of the best-ever turnouts of Herefords”. The Supreme Male Champion is Mrs. V. Willis’s Shradon Logic bred in Shropshire.

On the radio on 29th October, the BBC Midland Home Service broadcasts a “Portrait of a Village”. Presented by Norman Painting (of The Archers fame) and Phil Drabble, the programme is recorded at Old Court Farm.

During the year two events are held to raise funds for the new Parish Hall. On 28th October Mr. and Mrs. T. S. Hone host a beer and cheese evening at Bosbury House and, on 10th and 11th December, a group of over 50 people present a village concert of plays, sketches and musical tableaux. The local newspaper records there were ‘two uproarious performances’ and lists those taking part:

The Bridge Bakery closes this year having been in the Howe family for over 100 years.

In Memoriam:   George Collett who was born in Bosbury, dies at the age of 85. His parents kept the grocery business. Mr. Goodchap who had lived at Little Catley Farm for 73 years died at the age of 84.