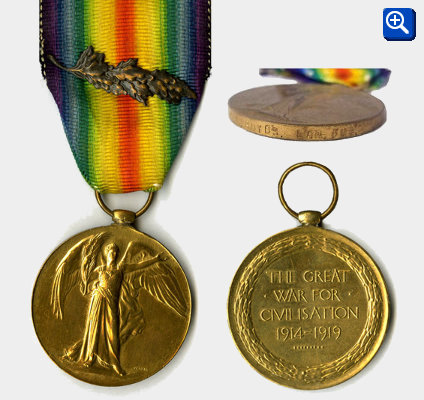 At the end of the World War I the various governments decided that each country should issue a medal of similar design, equivalent wording and identical ribbons to all those who had fought in the war. This was known as the Allied Victory Medal and it was given to men and women mobilised in any service, including nursing and the auxiliary services, and who had entered a theatre of war between the Declaration of War and the coming into effect of the Armistice. The Allied Victory medal was never awarded alone. All the recipients of the 1914 Star or the 1914-15 Star were issued with it, and most of those in receipt of the British War Medal. Individuals engaged in certain post-war activities also received it; the British Naval mission to Russia 1919 – 1920 and mariners who undertook mine clearance operations in the North Sea between 11 November 1918 and 30 November 1919.

The medal is 36mm in diameter, made of bronze with a lacquered gold surface finish. Like the British War Medal, it was designed by a member of The Artists Rifles, William McMillan R.A. It shows the winged figure of ‘Victory’ or ‘Nike’ holding in her right hand a palm branch representing peace. The artist’s initials, WMcM, appear by Victory’s left foot.The reverse has the text ‘THE GREAT WAR FOR CIVILISATION 1914 - 1919’ surrounded by a laurel wreath and the name of the person receiving the medal was stamped around the rim. The medal ribbon has the colours of two rainbows merging at the centre symbolising the calm after the storm. This medal was not awarded for valour but the oak leaf clasp shown here was added for individuals ‘Mentioned in Despatches’.

Nearly 6 million Allied Victory Medals were awarded in the UK and Empire.