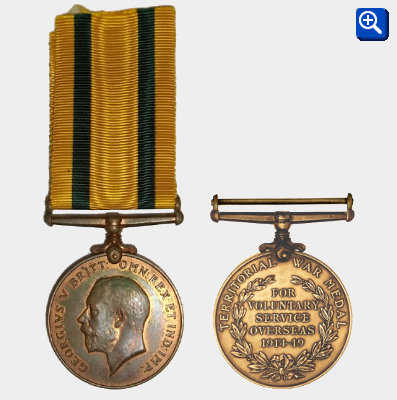 The medal is 36mm in diameter, made of bronze, and shows George V on the obverse (front), surrounded by the abbreviated Latin text GEORGIVS V BRITT. OMN:REX ET IND:IMP meaning ‘George V King of all Britain and Emperor of India’. On the reverse (back) is the text TERRITORIAL WAR MEDAL and FOR VOLUNTARY SERVICE OVERSEAS 1914-1919. The name, rank, number and unit of the recipient appears around the rim at the bottom edge of the disc. The ribbon for the medal is 32mm wide, silk, and is yellow with two green stripes. The Territorial Force War Medal hangs from a bar through which the ribbon passes.