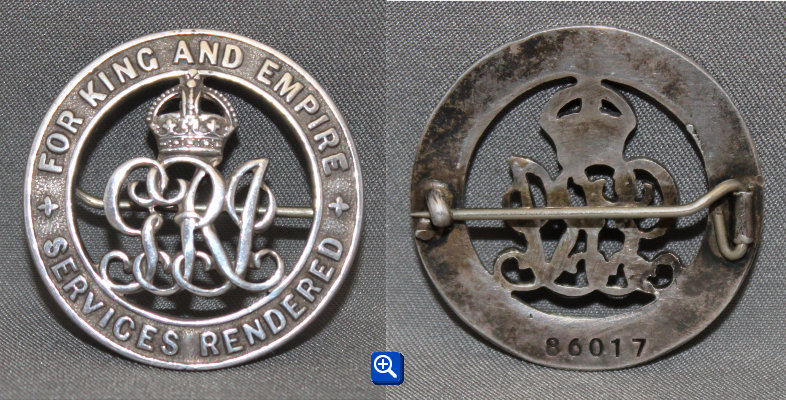 The Silver War Badge was awarded to members of all ranks of the British and Imperial Forces who retired or were honourably discharged from duty due to sickness or injuries sustained in the conflict. Civilians who worked in the RAMC, nurses, VADS etc. were also eligable. The badge also served one important purpose - to protect men of military service age from abuse. A man thought not to be in one of the Services would sometimes be given a white feather and accused of being a coward. The badge was known generally as the Wound badge.

The badge is made of sterling silver but is not hallmarked. It was originally meant to be worn with civilian clothing on the right breast. However if a man re-enlisted he was allowed to wear it on his uniform. The badge bears the royal cipher of GRI (for Georgius Rex Imperator = George, King and Emperor) and around the rim ‘FOR KING AND EMPIRE - SERVICES RENDERED’. Each badge was uniquely numbered on the reverse. The War Office made it known that they would not replace Silver War Badges if they went missing, however if one was handed into a police station then it would be returned to the War Office. If the original recipient could be traced at his or her discharge address then the badge would be returned.

Over a million Silver War Badges were issued.