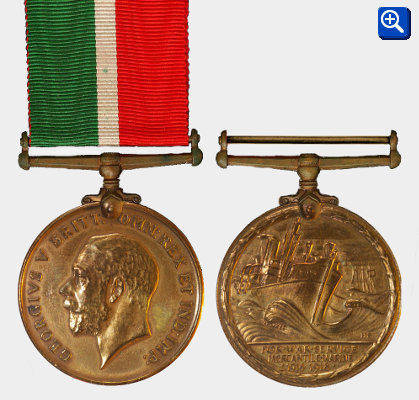 The Mercantile Marine War Medal was established in 1919 and awarded by the Board of Trade of the United Kingdom to mariners of the Merchant Navy for one or more voyages through a war or danger zone during the course of the war. Men who served in coastal trades, such as pilots, fishermen and lightship crews also qualified for the award of the medal. It was also awarded to those who had served at sea for not less than six months between 4 August 1914 and 11 November 1918. Recipients also qualified for the award of the British War Medal.

The medal is 36mm in diameter, made of bronze, and shows George V on the obverse (front), surrounded by the abbreviated Latin text GEORGIVS V BRITT. OMN:REX ET IND:IMP meaning ‘George V King of all Britain and Emperor of India’. The reverse shows a merchant steamship ploughing through heavy seas, with an enemy submarine sinking on portside and a sailing ship in the background. The exergue (space at the bottom below the line) is inscribed, in three lines, FOR•WAR•SERVICE, MERCANTILE•MARINE and •1914–1918•. Around the rim is a laurel wreath. The ribbon is 32 mm wide, silk, with a wide green band, a white band and a red band, representing a ship’s starboard and port running lights with the masthead steaming light in the centre.