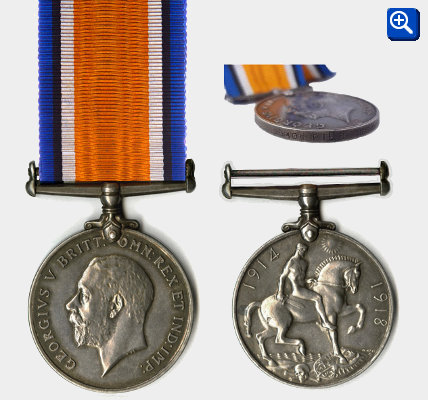 The British War Medal was awarded to members of all ranks of the British and Imperial Forces who entered a theatre of war or undertook service overseas between 5th August 1914, the start of the war and Armistice Day, 11th November 1918. The medal was later approved for issue to personnel who had served in Russia and Siberia in 1919 and 1920.

This was the most commonly awarded of the three medals as it was issued not only to British troops but also to men from India, Australia, New Zealand and other parts of the Empire who travelled to fight outside their own country. It was also awarded to members of the auxiliary services, including, for example, the nurses working in the military hospitals behind the lines. It was the only medal that could be awarded on its own.

The medal is 36mm in diameter, made of silver alloy (and a small number in bronze awarded to foreign battalions), weighing one ounce. It shows George V on the obverse (front), surrounded by the abbreviated Latin text GEORGIVS V BRITT. OMN:REX ET IND:IMP meaning ‘George V King of all Britain and Emperor of India’. On the reverse (back) is an image of a mounted swordsman trampling a shield with the Prussian eagle device, the dates 1914 and 1918 and the risen sun representing a bright post-war future. The name, rank, number and unit of the recipient appears around the rim at the bottom edge of the disc. The ribbon for the medal is 32mm wide, silk, and is gold with blue, black and white stripes down the edges. Unlike the 1914 Star and the Allied Victory medals, which are suspended from a ring, the British War Medal hangs from a bar through which the ribbon passes.

Over 6 million British War Medals medals were struck by the Royal Mint.