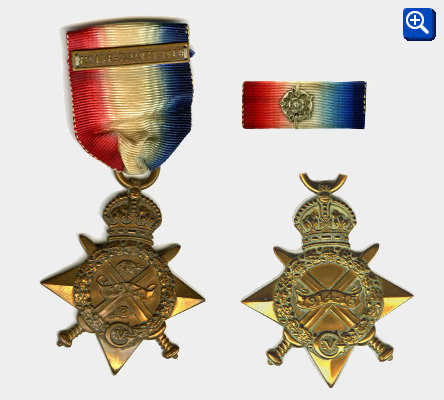 The ‘1914 Star’ was awarded to those who served with their units in France and/or Belgium between August 5th 1914, and midnight of November 22/23rd, 1914. This was a bronze star, with the Imperial crown at the top where the ring for the ribbon is fixed. On the face of the star is a pair of crossed swords, point uppermost, behind an oak wreath closed at the bottom with a letter G around a V (for George V). A scroll winds around the swords: it is inscribed with the date ‘Aug.- Nov. 1914.’ The men of the British Expeditionary Force, and the medical and auxiliary services staff were travelling towards Mons in August 1914 which was the site of the first battle of the war and the medal is sometimes called the ‘Mons Star.’

The ribbon for the Star is striped red merging into white and then into blue, reflecting the French flag. A clasp on the ribbon indicates service under fire; where the ribbon only is worn then recipients of the clasp were entitled to wear a silver rosette on the ribbon. This was known as the ‘Clasp and Roses’ (C&R) and had to be applied for and permission formally granted before the clasp or rosette could be worn.

A later version was the 1914-15 Star with a scroll carrying the text ‘1914-15’ across the front of the swords and the same ribbon. Both these medals were authorised in 1918, the second being awarded to all who served in any theatre of war outside the UK between 5th August 1914 and 31st December 1915, except those eligible for the 1914 Star. One individual was not allowed to receive both.

The medals had a plain back on which the name and regiment of the recipient was stamped. Neither the 1914 nor the 1914-18 Star were awarded alone, as recipients were also eligible to wear the British War Medal and the Allied Victory Medal.