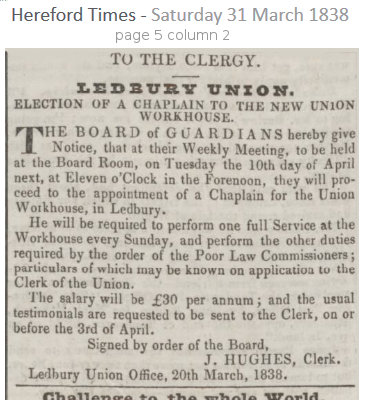 In May 1914 both William Sivell Lane and Edward Thomas Lane were on the Board of Guardians of Ledbury Workhouse (see Abergavenny Mail report in ‘Newspaper Snippets’).

The people living in the Ledbury Union Workhouse are given in the census but this is a snapshot on one day every ten years so many of the Bosbury folk who died in the Workhouse are not recorded on the census and many people were recorded in the Workhouse who may have only been there for a short period or who died and were buried in Ledbury. In 1851, 1861 and 1871 the residents were called ‘Paupers’, in 1881 and 1891 they were ‘Inmates’, and in 1901, ‘Patients’. The year they were born is only approximate as the different census ages are not always consistent. The parish registers and grave inscriptions may be more reliable. (See ‘Parish Church records’)