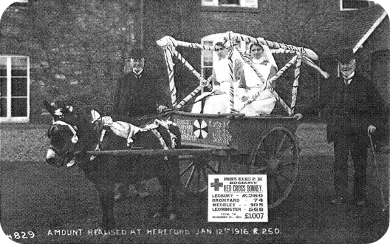 Property of Mr. E. T. Lane, Old Court, Bosbury
Over £3,100 has been collected for the Farmers’ Contribution to the Funds of the Red Cross Society

THE RED CROSS DONKEY
By Anon.

You have heard of Balaam’s donkey
Talking in the narrow pass;
And no doubt with many others
Thought he was a clever ass.
You have heard of other Neddies
Quite as forward in their way;
And perhaps you’ve tried to fathom
What’s the meaning of his bray.

Let me tell you, I’ve been learning
Lots I never knew before;
And it’s been a noble donkey
That has added to my lore.
You perhaps may deem me flippant,
I assure you, sir, you’re wrong;
And ’tis she my donkey teacher,
That inspires this present song.

Jenny was a Bosb’ry donkey
And belonged to E.T.Lane;
She one day began a-talking
Though at first not very plain.
But as practice makes perfection,
She ‘ere long was heard to say:
“Master, would you like to sell me
When we go to town today?”

Farmer Lane was much offended,
And he told the donkey so;
“Have I forced you,” he demanded,
“When you did not want to go?
Have I ever acted harshly,
When you showed me you were tired?”
Jenny gave a lovely answer
That some thought quite inspired.

“Master, you’re the best and kindest
Master ever donkey had;
And if selling meant us parting
I believe ‘twould drive me mad.
But last time I was in Ledb’ry
I saw wounded Tommies there;
And I thought I’d like to kiss them
Fondly, if I only dare.”

“Two stout farmers by the ‘Feathers’
Were discussing this and that,
And I stopped a while to listen
To their little mid-day chat.
The were speaking of the wounded,
Of the dying and the dead;
It was then and there a notion
Entered my poor silly head.”

“I determined I would ask you
To endorse a scheme of mine,
Whereby all our stricken Tommies
Would be fed on cake and wine;
And get all the good things needful
To replace them on their feet;
So that they might soon be ready
German Huns to chase and beat.”

Farmer Lane admired his donkey
But he dearly loved her then;
And resolved that he would sell her
To refit our wounded men.
So he took her to the market,
Boldly told the donkey’s tale;
And the Red Cross Funds were richer
From the fruits of Jenny’s sale.

Jenny nodded to her master,
Crept towards the auctioneer
Then, when all the folks were busy,
Whispered something in his ear.
“Well I’m jiggered!” said he, thumping
On his little desk again;
This here ass is good as Balaam’s
And is talking quite as plain.

She is fond of wounded Tommies,
Dearly loves the neat Red Cross
And she begs her new-made master
To re-sell her at a loss,
So that she may not be parted
From the master loved so long.”
And the cheering in the market
Brought about a mighty throng.

When our faithful Jenny’s story
Had been passed from mouth to mouth
People flocked from all directions -
From East, West, from North and South.
All were anxious to possess her,
Who refusing to be sold,
Yet was sold for noble purpose
Bringing in a pile of gold.

She was often sold at Ledbury,
Adding sovereigns to the pile;
And the luck she met at Weobley
Made her wink her eye and smile.
Leominster people did their duty,
Hereford and Worcester too;
And at carpet weaving Kiddie,
Folks did all that folks could do.

Friend, I here must pause a moment,
For mine eyes are wet with tears;
Jenny’s life of patient labour
Now is done but not with years.
Accidents will sometimes happen
Cutting off the good and brave;
Such has happened to our Jenny,
Giving her an early grave.

But wherever men assemble
In the markets of the west,
One and all will swear that Jenny
Of all donkeys was the best.
And our sick and wounded soldiers,
When dear Jenny’s tale they hear,
Will be prey to deep emotion,
As they check the falling tear.

Jenny’s left a son behind her
Who will take his mother’s part;
He ‘ere long will be at Bridgnorth
Where he’ll get a goodly start.
And his master begs that people
In the favoured town of Ross
Will prepare to meet young Neddy
For the sake of the Red Cross.