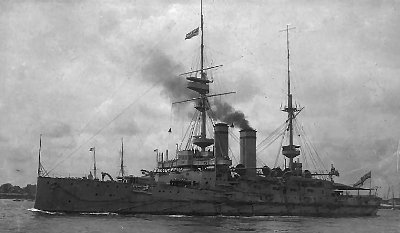 It is with the greatest pleasure that I write you these few lines to thank you for your most welcome letter and postcards of dear old Bosbury. Well, we have had some exciting times, for the fighting Venerable [shown above] has been in action on the coast of Belgium. Our ship had the honour of being the first battleship to be in action – the other ships have been cruisers, destroyers, and monitors. On account of the Germans bringing up their heavy guns it was necessary to send a heavy gunship to cope with them, so we joined up with Admiral Hood’s squadron on the morning of the 27th October at early dawn. I went on deck at six o’clock, and the first thing I saw was one of our monitors shelling a position on the east side of Nieuport, and the Allied artillery ashore was firing also. Their position was on the west side. At 7.45 the Venerable fired her first shot, and the shell fell right in the enemy’s trench. Then we brought our 12-inch guns into play, each of which weigh 30 tons. The shell itself is nearly eight cwt. Just fancy that striking a Uhlan * in the watch pocket and on exploding scattering ‘seeds of kindness’ for a radius of about seven or eight hundred yards.

The Venerable simply raked their trenches fore and aft - it was unmerciful. The enemy replied with vigour, but each time we found their fire our guns would sweep their batteries. On the second day of the bombardment we had a proper exciting time. I was told off as upper deck patrol, in case of fire breaking out. I was standing in the starboard upperdeck battery, when a shell screamed about 30 feet above my head, passing between the two funnels. I went forward, portside, and saw one of my chums watching the result of the shell fire, and I spoke to him. At that instant another shell swept over our heads just missing our foretopmast. Their shells were falling all about us, but we were not struck once. The enemy’s submarines were very active indeed on the second and third day and they tried their utmost to get at the Venerable. A torpedo on one occasion just missed our stern by a few feet. We opened fire on the submarine, and she disappeared, but I would not say that she was struck. On the third day one of our destroyers tried to ram a German submarine. Several of our small ships were struck by the shells from the coast guns. 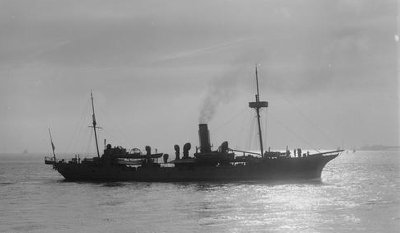 It was amusing to see the sloop Vestal [shown above] thumping along after she was hit - she was in the wake of the Venerable, a little on our starboard quarter. The shells were falling very fast and the enemy ceased firing on the Venerable and concentrated their fire on the weaker ship (the Vestal). I saw the sport. Shells dropped all round her, and then one went clean through her foretop mast, unshipping her wireless. She put on a spurt, and at the same time swung round to the starboard and held that course for about a cable’s length, then swung to port again. She was banging away for all she was worth, as much as to say “Now try your luck.” The destroyers did magnificent work in repelling the attacks of submarines.

The Venerable was having a ‘breather’ when your most welcome letter arrived. I pictured dear old Bosbury when I was looking on the town of Nieuport. It was a flourishing town a few months ago, and now it is deserted. Not a soul is there except a few Germans watching the movements of our warships. On the east side, near the pier, the River Yser runs into the sea. The large buildings of the town were burning, set on fire by our shells. We had to fire in that direction because the German heavy guns were cleverly concealed in that locality. A terrible battle must have been waging on land, for we could hear the thunder of the guns that must have been several miles inland. I shall never forget the part we played in the bombardment. Poor Belgium. But there is one thing, the Venerable played the greatest part in avenging Louvain. We are all very proud of our ship, and so far as I am concerned, I would not be anywhere else for the world. And now I must close, as Tom is waiting to ‘censor’ this letter. With kindest regards and best of wishes from your old time scholars,

This letter was reproduced in the Ledbury Guardian of 5th December 1914 under the heading BOSBURY MEN ON HMS VENERABLE IN ACTION ON BELGIAN COAST. Nieuport is Nieuwpoort, south-east of Ostend, and was the northern end of the trench system of the Western Front.

* ‘Uhlan’ meant lancer in mainland Europe and it was the word generally used by the British for German cavalrymen. The Imperial German Army included twenty-six Uhlan regiments who were dismounted to serve as ‘cavalry rifles"’ in the trenches of the Western Front.