SCENES AT BOSBURY AND LEIGH SINTON.

IMPROVED CONDITIONS OF PICKERS AND DRYERS.

“All right, guv’nor. Don’t be afraid. We shan’t eat yer.” The speaker was an old hag of a woman smoking a clay pipe. She sat enjoying her evening solace, a stump of a tree being her throne, and all around a motley crew squatted in the open, the zephyr being warmed by an array of fire buckets or “devils.” I had motored from Hereford, resolved see the conditions under which pickers lived at the close of their day’s toil, and a variety of circumstances which I need not explain landed me at Cold Green, Bosbury, the homestead of that enterprising and successful agriculturist Mr Edmund G. Shew.

I was about to peer into a section of the pickers’ night quarters, when the above harsh toned, but, nevertheless, kindly and reassuring invitation was extended. Unlike the majority of dimly lighted places to be found in the country, here night was turned into day by the aid of a light about which more anon.

A low corrugated iron building was partitioned off for families, and a plentiful supply of straw and canvas provided. True, the creature comforts thus bestowed were little superior to those made for beasts of burden, but then what does one expect. A grower cannot provide feather beds for some two or three hundred pickers. He endeavours to make his buildings as comfortable as possible, and in this respect Mr Shew is particularly considerate. The “roadsters” are placed apart from the families, who mostly hail from the Black Country, but then cover is only sought for the purpose of sleep.

A spot near the rick-yard becomes common ground, and the scene is exceedingly picturesque. Although the majority of the pickers constitute broken-down specimens of the under-world, they are in rags and tags, and some have little regard for the cleansing qualities of water, still on the whole they give the impression of being a gay, merry Bohemian lot, caring little what the morrow brings forth, content to work hard, to live hard, to swear hard, and to drink hard, deriving –in their way- as much enjoyment out of life as possible. It is a general consensus of opinion that gipsies make the best pickers. They are so much more clean in their methods.

On this particular night in Cold Green a large number of sacks containing freshly picked hops lay on the lawn, and two men were engaged in carrying them to the drying kilns. An engine was working at full pressure, and a fire hole kept going to maintain a certain temperature. This is the condition of things night and day for fully three weeks. The hop kiln is undoubtedly a hive of industry.

>House, buildings and yard were lit up by the “Simpetrol” light, for which Mr Shew is full of praise, and never fails to recommend. What a contrast to the use of the old-fashioned hurricane lamps! ln the yard four sixty-candle power lights in one globe, suspended from a 16-foot pole, made the night working conditions as easy as the day. Smaller lights were provided for the house and buildings, to be switched on and off at will. Even the pickers in their respective quarters had the benefit of its use, and thus fire risks were reduced to a minimum.

Mr Shew was the first to instal this system of lighting, and three other hop-growers in Herefordshire and Worcestershire have followed suit with highly satisfactory results. Mr Shew has the lights inside his kilns, and his men are thus better able to keep a careful watch on the drying of the hops. Mr Bracewell, of the Autocar Company, Commercial Road, Hereford, was responsible for the installation.

The “Simpetrol” light, while being smokeless and colourless is free from sulphur and ammonia and the noxious fumes which are associated with some of the methods of lighting. It is the air gas system and non-explosive and non-poisonous. Farmers in general should find its use of inestimable advantage.

Apart from the light I was most pleased with the economic pure air system of drying hops, of which Mr Shew is the patentee. It improves the quality, enhances the selling prices and produces the best prize samples which past experience has proved. Many crude methods are worked by unenterprising growers even in the present day. Experts agree that the pure air dried hops are superior in flavour to those dried by the old methods. By Mr Shew’s method the pure air flows in the kiln, is directed over the heater, rises through the hops and escapes at the top. The whole of combustion takes place inside the heater itself and the products therefrom are carried away by main smoke pipe through louvres. There is therefore no risk of arsenical contamination. Last year the £100 prize given by the Royal Agricultural Society of England at the Gloucester show for the best hop drying plant was awarded to Shew’s patent plant in open competition. Numerous prizes have been won by hops dried with this system, and Mr Shew himself has been one of the most successful, so that his method is worthy of serious consideration. In the majority of kilns the sulphur is choking to the dryers, whilst tons of hops are spoiled in drying through contamination, burning, etc. So much for the lighting and drying systems in vogue at Cold Green.

Reverting to the pickers, a liberal allowance of faggot sticks and coke is given, and it is just as well, because pickers cannot resist the temptation of hedge-stakes for firing for the kettle and the pot, whilst field cabbages, turnips, and potatoes are sometimes deposited in the latter vessel in a promiscuous manner. Poultry and eggs are also missed. Shopkeepers in the villages have also to guard against a raid. This is about the extent of the pickers’ dishonesty. Picking is a healthy occupation, and there are many amusing and joyous scenes around “the cribs”, and not a little grumbling at the official records of measurements. “Subbing” is invariably practised, in order to provide for immediate wants, whilst the threat of a “strike” is ever prevalent.

Mr. Shew told me that with few exceptions there was about two-thirds of a crop in Herefordshire. The quality was good.

I next visited the farm of Mr. Bomford, Leigh Sinton, near Malvern, Worcestershire and a similar state of things existed there. A “Simpetrol” lighting system on a larger stale was in evidence Mr. Bracewell’s men having not yet completed the plant. The brilliance and utility of the light has already produced the most favourable encomiums [written expressions of approval] in the district. Mrs. Bomford informed that she would not be without it. She is especially proud of the light and fittings in the house. A large and extensive yard was one mass of illumination, and all the buildings were lit up, adding greatly to the convenience of the pickers and, of course, the ordinary staff of workmen. A large number of pickers were comfortably housed in the various farm buildings and they were a contented lot, although I was informed some were given to “pinching.”

In some districts mission tents are provided and the spiritual and material wants of the pickers attended to. Refreshments are provided at an all-round tariff of one halfpenny, which is practically cost price. Thick slices of bread and butter, or bread and jam, chunks of cake, or tea biscuits in a bag can be procured at this uniform rate. Soup kitchens are also provided.

The accommodation for pickers has been much improved in late years, and much more kindly interest is taken in their general welfare.

The scenes at Bosbury and Leigh Sinton are quite typical of Herefordshire and Worcestershire hop-picking at the present time. I must relate one circumstance which came under my observation. When near the Eastwood Oak, just beyond the village of Tarrington, on the Hereford and Ledbury road, I came across a “grubbed up” hopyard, the wires remaining. In the place of hops grew wheat, and above the wheat was a notice, “Hop-pickers wanted.” Presumably pickers were wanted for neighbouring yards, but the announcement seemed full of tragedy, situated it was in a disused hop-yard and above standing corn. That disused hop-yard—and there are many more the two counties—points to a moral. “When will the grower be protected from the unfair competition of foreign-grown hops?” 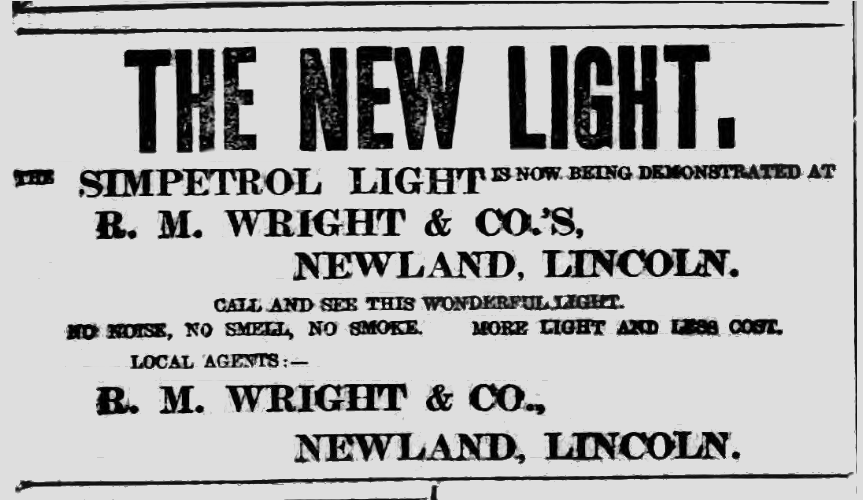 Note: The “Simpetrol” light advertised in the Lincolnshire Echo, 16 July 1909.