Bosbury Workhouse in the Vestry Minutes 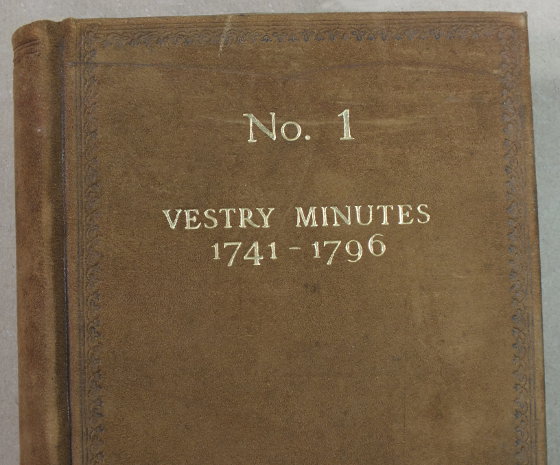 March the 31st 1757
At a Parish Meeting whereof one Notice was given It was agreed by us the Minister, Church Wardens, Overseers & others to join in the Work House at Ledbury paying from May Day according to the draught agreed upon at Ledbury as Witness our hands
M.Browne Vicar
John Jones ) Church Warden
John Jones ) Overseer
Charles Bennett
William Prichard
John Terrett
Thomas Williams

December the 21st 1762 It was agreed at a Parish meeting Held this day to send for the Governor of the General Workhouse at Hereford in order to make an agreement for the Poor of this Parish and at the same time it was agreed to take John Gwilliam and his two sons before the Justice as soon as posable [sic]: the said John Gwilliam having brought his children and delivered them up to the officers ^Church Wardens^ as witness our hands
[signed] John Alcott Sherborn Chadd Joh Mutlow John Weaver William Prichard Thomas Chevining James Raynolds The mark of Thomas Gwinn William Stephens Thomas Williams John Terrett

At a Parish Meeting held Thursday the first day of May 1777 being called for the purpose of taking into consideration the erection of a Workhouse and providing for and employing the poor of the Parish.

It is unanimously agreed upon by the Parishioners this day Assembled That an Additional Building be immediately erected adjoining to the Alms Houses for the Purpose of a Workhouse maintaining, providing for and Employing the poor of this parish and that Mr John Mutlow, Mr Stone Mr Bennett and the Overseer of the poor Do meet at these Almhouses to morrow Morning at Eleven o’Clock to lay out the Ground for erecting the said Workhouse and that they do employ a Carpenter or House builder to undertake the said Building as soon as possible. It is also ordered that an Assessment be given to the Position of both Divisions to Raise a sum of Money that shall be required towards Completing the said Workhouse. And that a Governor or Governors be employed for the purpose of Inspecting and taking care of the poor committed to his care, who is to be paid by the Overseer according to what agreement the above Gentlemen named think proper to enter into for the purpose who full Power and Authority to bargain for and purchase all manner of Materials for the said building.

February the 5th 1778 at a Parish meeting Held this Day it was agreed to Give Phillip Bufton a note to satisfie the Parishoners of Castle Froom that We Do own and acknowledg[e] the said Phillip Bufton and his wife Hannah to be Parishoners Legal[l]y Set[t]led with us and Likewise He the said Phillip Had a paper Given Him for that perpose at the same It was agreed to Give Mrs Dawson three pounds a year to be Governess of the Workhouse in our Parish so Long as our pleasure is [signed] Churchwardens James Hartland and Peter Morley, James Allcott, John Mutlow, Charles Bennett, William Prichard, Thomas Hill, Richard Harvey, Thomas Apperly

February the 19th 1784 at Parish meeting Held this Day whereof Due Notice was Given in the Church it was then agreed to sett the Workhouse to John Baggott and Thomas Hartland at the sum of one Hundred and twenty pounds a year for three years to maintain all the Poor according to the articles now Here present and to Enter the 23 of this Instant as Witness our Hands
[signed] William Goodman and Arthur Kitching, his mark – Churchwardens, John Mutlow, James Alcott, Thomas Williams, John Goodman, Thomas Apperly, John Baggett, Thomas Hartland, John Kendrick, Thomas Gardiner, James Hartland, Benjamin Gwinn, Thomas Lane - Overseer, Benjamin Davis, Edward Bourn, Richard Barrett – Overseer, Richard Kendrick, Charles Bennett, William Palmer