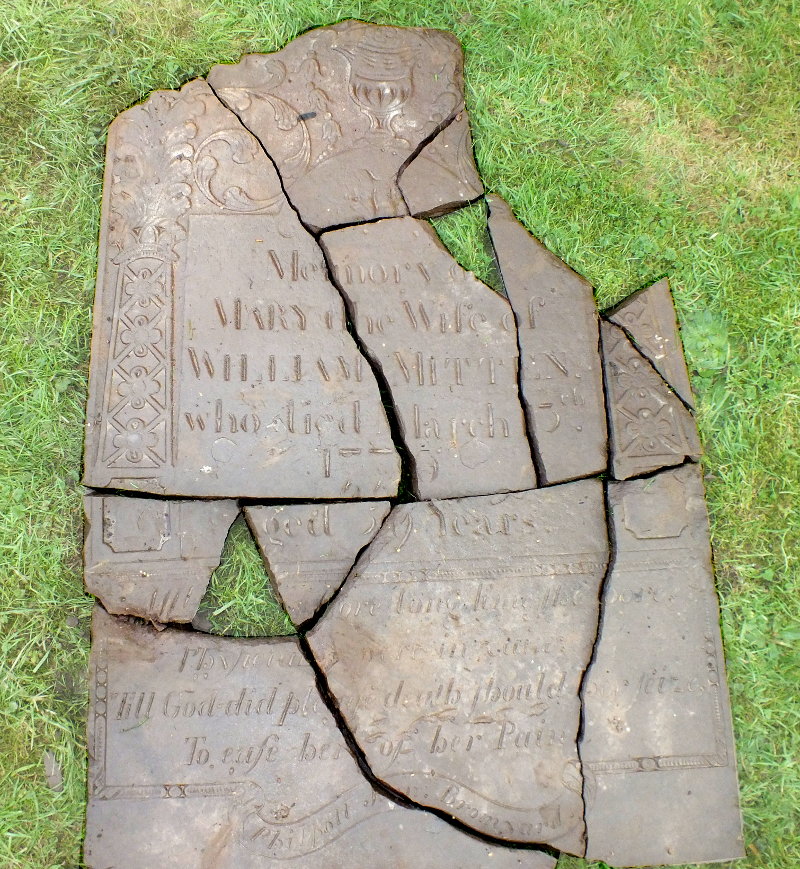 Although the gravestone carving is crisp amd clear, the grave is not recorded by Rev. Samuel Bentley in his 1891 history so presumably was buried and lost before that date. There is a query on the surname. On the stone, Mary’s surname is ‘MITTEN’ but it is recorded in the parish burials register spelled ‘MITTON’. William and Mary’s two sons, William and John, are recorded in the parish baptisms register but again with the surname ‘MITTON’. Both spellings occur in census records but ‘MITTON’ is by far the commonest. The name is said to come from a place name in Old English ‘mydd-tun’ meaning ‘settlement in the middle’. The family came to Bosbury and then left with no clue as to where they went.

[Afflictions sore] long time she bore
Physicians were in vain
Till God did please death should her seize
To ease her of her Pain.

This particular verse, with variations, was widely used on gravestones in England and her colonies from around 1750 to 1900 and is observed in Charles Dickens’ David Copperfield—


“ I look up at the monumental tablets on the wall, and try to think of Mr. Bodgers late of this parish, and what the feelings of Mrs. Bodgers must have been, when affliction sore, long time Mr. Bodgers bore, and physicians were in vain. I wonder whether they called in Mr. Chillip, and he was in vain; and if so, how he likes to be reminded of it once a week.”