Richard LEWIS was baptised in Bosbury on 23 October 1796. He appears in the Bath censuses of 1851 and 1861 and is buried in Lansdown Cemetery in Bath. His gravestone is in Section 4, row A4, number 30. 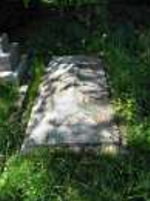 In the 1851 census, Richard was aged 54 and living at 2 Bartlett Street, Bath with his wife Mary, aged 59, who was born at Wysham (Berks), and children, Eliza, 22, born at Wysham, William, aged 19, an engraver, and Richard, aged 18, a cabinet maker, both born at Bath. In the 1861 census they lived at a cottage adjoining Gays House, Bath. His occupation was given as formerly an innkeeper and it was confirmed that he was born at Bosbury, and aged 70. His son William was now an engraver, lithographer & stationer, married to Eleanor Bishop from Llandogo in Monmouthshire and they had two children. The death of Richard Lewis, aged 69, was registered 1866/Q3 Bath and in the burial register records he was buried on 23 July 1866 and the gravestone records his wife’s death as 26 May 1871 when she would have been 79 (So the transcription of ND on the stone is not correct). Kate Lewis was the daughter of William and Eleanor. The burial register records she was only 11 weeks old when she died. Bath Preservation Trust 2009

Charles Edward Audley Lloyd of The Grange, Bosbury was Surveyor on the Ledbury Highways Board as noted on page 402 of Littlebury’s 1876-1877 Herefordshire Directory & Gazetteer

A number of Bosbury people spent their final years at St. Catherine’s Almshouses in Ledbury.

William Preece was baptised in Bosbury on 7 June 1784 to parents Thomas and Mary. He married Elizabeth Hill in Ledbury in 1812 and the family appears in the 1851 census. He worked as a carrier and Elizabeth was a Monthly Nurse and they had a number of children including Sarah, 1828 and John, 1832. He is recorded in 1861, married, living in St. Katherine’s Almshouses aged 77.

Elizabeth Symonds was living in the St. Catherine’s Hospital in Ledbury in 1891. The census says she was born in Bosbury in 1822 and the parish register records that she was baptised Elizabeth Butt on 31st January of that year. Her father Wiliam was a shopkeeper at that time but in 1841 he and his wife Hannah were running the New Inn in the Homend, Ledbury. Elizabeth married Henry Symonds, a grocer in High Street, Ledbury in 1842. He died in 1847 and she took over at the New Inn with her sisters Hannah (Ann) and Charlotte. By 1881, after her sisters had married and moved on, Elizabeth was manageress of the New Inn Hotel. When she retired she moved into the almshouses where she died in 1912 aged 90.

William Harris was born in Bosbury in 1803. He married Ann Rowberry in 1824 and moved to Ledbury. They lived in Bye Street and he worked as a haulier. There childrem included Eliazbeth, Charlotte, William, John and Mary Ann who was born in 1844. Ann worked as a charwoman and moved into St. Katherine’s Almshouses when William died in 1880. She died there in 1897 aged 95.

Sarah Webb appears on the 1861 census as being born in Bosbury in 1784. She was a widow so her maiden name should appear in the Bosbury baptism register but only Saarah Turner were baptised in that year and she married John Wilks. In 1861 Sarah Webb was a Monthly Nurse working and living at ‘The Steppes’ surgery with Dr. Griffin and his family. By 1871 she had moved into 4, St. Catherine’s Almshouses with her daughter, Mary, and she died there in 1880 aged 96.

Elizabeth Webb was buried on 13 December 1878 in Bosbury churchyard aged 65 and is recorded as living in St. Catherine’s Almshouses in Ledbury at the time of her death. Two Elizabeth’s were baptised in Bosbury in 1813 so her maiden name may have been Davis or Field. Her husband Nathaniel Webb farmed at Upleadon Farm in Bosbury and they had a number of children including Milly, Elizabeth, Nathaniel, Robert and Mariann, the youngest, who was born in October 1848. Elizabeth’s husband died in 1852.