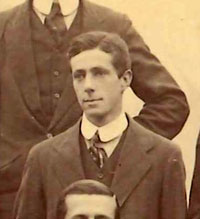 Alan Buchanan went to Downing College, Cambridge in 1910, studying Physics and Engineering. After the outbreak of war, he joined the former Liverpool Scottish Regiment, renamed the King's (Liverpool Regiment), 1st/10th Battalion, as a Private. He was killed in action on 16th June 1915 at Hooge, near Ypres, aged 25. His obituary in the College magazine, ‘The Griffin’, in Michaelmas 1915 reads:

“He was of a somewhat retiring disposition, but was well-known and popular in the College, played some Rugby football, and was Secretary of the Lawn Tennis Club. Soon after the war broke out, he volunteered and went to Flanders in October, 1914. In December he was invalided home with typhoid, after earning high encomiums by his indomitable spirit and cheerfulness under hardships. Going out again in the spring, he met his death on 16 June 1915. The following is quoted from a letter written by a N. C. O. ‘Mr. Alan Buchanan was killed in action on the morning of the 16th inst. (June). He was assisting to get a machine-gun into position after our first advance to the first line of German trenches, when he was hit on the head by a shell. He was one of the bravest men we had, and when he was hit he was encouraging his comrades in the most cheerful way’.”

After his death, his family established the Buchanan Scholarship Fund for arts students at Downing College in his memory. This is still available to Downing students today as part of the Graduate Hardship Fund.

A war memorial plaque in College commemorates all Members who lost their lives in the war.