A Bosbury survivor of the Great War.

Will Jones, a signwriter from Malvern
remembers his grandfather

Will Jones’ grandfather, Percy Fletcher, fought in the Great War – and even played in the famous football match in No Man’s Land between the British and German trenches during the Christmas Day truce in 1914. 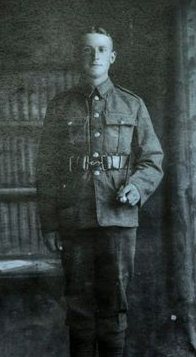 Private Fletcher’s war record is packed with drama. He cheated death when – out of pure kindness to a comrade-in-arms – he gave up his place on an evacuation ship, although he himself was wounded and was longing to return home. It was an act of selflessness which served to save his life, because the ship was torpedoed by the Germans and all 200 troops on board were drowned.

The farmer’s son from Bosbury, near Ledbury, Herefordshire, enlisted in the Shropshire Light Infantry at the outbreak of World War One by lying about his age. He was just 16 – but said he was 18.

Will, from Malvern, said: “Grandad Perce was my mother’s father. I knew him well because he lived until I was 15 and I used to see him a lot. He was a lovely man, but quiet. He didn’t tell me much about his war experiences and I wish now that he had because I have so many questions. But he often talked to my mother – his daughter – about what he went through and she has told me over the years. I knew about the famous Christmas Day football matches in No Man’s Land, but it wasn’t until a few years ago that my mother told me that Grandad played in one of them. He said that as well as having a kick around, the British and the German troops swapped cigarettes and showed each other photographs of their loved ones before going back to their respective trenches. It seems incredible that men could play football with each other one day and then resume the task of killing each other the next day.

Grandad Perce always said he liked the Germans – they were ‘just like us’, he said – and he never bore the ordinary Germans any grudges for either of the two world wars.”

Will, who trades as Will Jones Signwriter, said that his grandfather seemed to have flirted with death daily throughout the four years of World War I. He recalled: “At one point, he was a medical orderly and was carrying a wounded soldier to safety from the battlefield. Bullets and shells were flying all around him but he wasn’t hit. When they reached cover, the casualty said: ‘You’re going to survive this lot. Your name just isn’t on The List’.”

In fact, Pte Fletcher’s name was on two lists – first of the war wounded and secondly the astonishingly-lucky. Will said: “Towards the end of the war, Grandad was shot in the knee by a German bullet and was repatriated back to England. I don’t know the date but it must have been very late on in the war because he never went back to the front. He went to hospital when he returned home and he walked with a slight limp for the rest of his life.But while he was waiting for an evacuation ship to bring him home, he started talking to another wounded soldier who kept saying how desperate he was to get back to see his wife and children.”

“Grandad Perce was unmarried then and had fewer family ties. So he gave up the last berth on the ship because he knew how much this stranger wanted to get home. He learned later that the ship had been torpedoed. There were about 200 wounded soldiers and the ship’s crew on board. None survived. Grandad Perce caught another vessel two days later which crossed the Channel safely.”

After a spell with the Military Police, Percy Fletcher returned to his family farm in Herefordshire and married his sweetheart, Lily Courtney, from the neighbouring village of Evesbatch. The couple went on to have three children – including Will’s mother, Myra, now a widow of 84 and living at Cradley, near Malvern. There were 15 grandchildren. Percy went on to run the family farm and during World War II – when he was he exempted from fighting because of his vital national food-growing role – there was another German twist in his life.

Will recalls: “There was a prison-of-war camp – for Germans and Italians – close to the farm, and the prisoners used to be farm labourers. Grandad Perce and the German prisoners spoke to each other every day – as best as they could – and he even learned to speak a bit of German.”

Percy Fletcher the warrior, farmer, football player and the luckiest of men died in 1968 at the age of 70.

Note: Percy Valentine Fletcher was born on 14th February 1899 in Bromyard but he was baptised in Bosbury church on 14th May and the family were living at Long Acre, Bosbury in 1901. He is not named as having served, on the Bosbury war memorial bronze plaque. The J.A.Fletcher named is probably his brother James Allen who was nine years older. Both were buried with their wives in Bosbury churchyard. BSS