Philip Clissett lived and worked in Bosbury from about 1842 until his death in 1913. He was a chair-maker who made his chairs in the traditional way, splitting green wood, and shaping it with a draw-knife, by turning on a pole lathe, or by bending. He produced ladder-back and spindle-back chairs in many designs, with both wooden and rush seats.

Clissett came to the attention of the Arts & Crafts Movement in the mid-1880s. His collaboration with the architect James MacLaren, who came upon Clissett’s workshop by chance while out for a walk, has been described as “a seminal point in the subsequent development of the Arts and Crafts Movement”. About fifty of his chairs still furnish the Great Hall of the Art Workers’ Guild in London, and he taught the Arts and Crafts designer Ernest Gimson the rudiments of chair-making. Gimson produced several designs clearly based on Clissett’s ladder-back. The Bosbury workshop was visited by many well-known architects and designers of the Arts and Crafts Movement, and Clissett’s chairs are known to have graced many of their houses. His work is now avidly collected, and examples can be found in museums in London, the provinces, and the USA.

Born in Birtsmorton, Worcestershire in 1817, Clissett learnt his craft from his father who was himself the son of a chair-maker. After marrying a Bosbury girl, Mary Cole, in 1840, the couple moved to a cottage at Stanley Hill where Philip set up his workshop. There they raised two sons, one of whom became a chair-maker.

Clissett seems to have taken an active part in local life from the moment he arrived in Bosbury. From 1844 to 1849 he served as a Parish Constable. He was a keen gardener, and won many prizes in the Colwall Flower Show between 1862 and 1873, including, on two occasions, best flower borders in Bosbury. After the Wesleyan chapel had been built at Stanley Hill in 1863, he was a regular attendee there. He took a great interest in Liberal politics; the parliamentary candidate, Harry Webb, called on him in January 1910, and conveyance to the poll in a motor car was arranged. A great treat for the 93-year-old, apparently!

Bosbury seems to have been a focus for chair-making during Clissett’s lifetime. His son, William, was active during the 1860s, and two grandsons, William and John, were working with Clissett during the early years of the 20th century. William Cole (active c1845-75) and Richard Edwards (active c1855-1900) both lived in the parish, and may have learnt the craft from Clissett.

Philip Clissett continued to make chairs into his nineties. He died in January 1913, having just reached his 96th birthday. The funeral service was held at the Wesleyan chapel close to his home, and he was buried in Bosbury churchyard. Short obituaries appeared in several local newspapers. 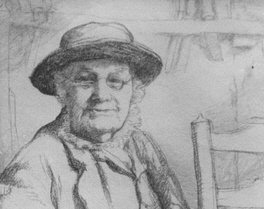 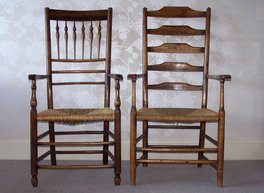 Two chairs by Philip Clissett. The ladderback was passed down through the family and is still owned by a Clissett-descendant. The spindleback is stamped with Clissett’s initials, PC, on the tops of the back legs.

Prepared by Terry Rowell, 2011. The author would be pleased to hear of any unpublished material and artefacts relating to Philip Clissett, such as photographs, documents, tools, and so on. There is a lot more about Philip Clissett on Dr. Rowell’s website (http://www.philipclissett.co.uk).