John Stedman of the Razes was the fourth generation of the Stedman family to live in the parish of Bosbury. The earliest Stedman to appear in the parish registers is Ann who was buried on 27th August 1673. It is believed she was only two years old. Her father Edward was also buried in on 26th February 1697 (1698 NS). His son Richard had a son James, born around 1710 who married Susanna Ballard from Worcester around 1730. Their children’s baptisms are recorded in the Bosbury church registers. The eldest was John and he had brothers Richard (1733-), James (1733-1809) and Philip (1744-1820), and sisters Anne (1735-) Mary (1739-) and Susanna (1737-). John married Anne Reynolds in Lyonshall Church, Herefordshire on 19th April 1756.

John and his brother Philip sailed to America, possibly hearing tales of life over there from their brother James’ fiancée, a Mrs. Laughton. They left soon after James wedding in 1760 and arrived at Niagara Falls the following year. The British had built ‘Fort Schlosser’, named after the first commanding officer at the site, at the upper landing above the Falls when they occupied the area in 1760. It included a two-storey clapboard house built onto an existing stone chimney from an earlier house and having holes through which muskets could be fired. Until now, the Native American tribe living alongside the river, the Senecas, had the concession from the French for carrying goods on a trail past the Falls, but, when the British took over, they appointed John Stedman as Portage Master and later also appointed a military partner, Lt. Francis Pfister, to keep an eye on the operation. John and Philip lived in the Fort Schlosser house and Philip was given a contract to construct an eight-mile wagon road past the Falls from Fort Schlosser down to Queenston Landing. 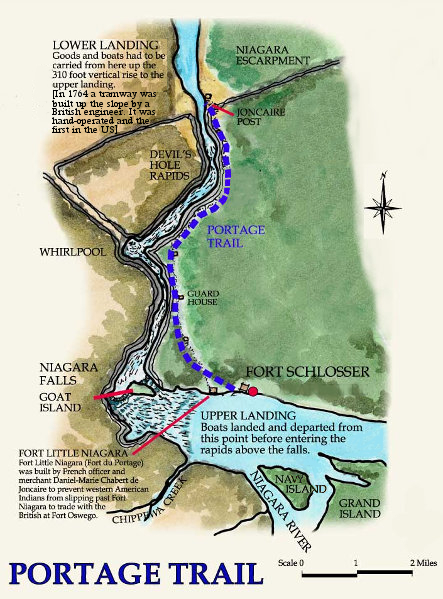 From Great Lakes Seaway Trail Outdoor Storyteller Sign. (The portage trail was made redundant by the opening in 1829 of the the Welland Canal, linking lakes Ontario and Erie to the west of Niagara.)

The portage road was completed in 1763, and, a few months later, John had a brush with death that still echoes in the history of Niagara. On September 14th 1763, he was leading a wagon train returning north from making a delivery to Fort Schlosser and provided with a military escort. It was ambushed by Seneca warriors at a place called Devil’s Hole. The British teamsters and soldiers were driven over cliffs to their deaths but two soldiers survived the fall and John Stedman said that he cut the reins from the Indian who held his horse and galloped over bodies to the shelter of nearby woods and then back to Fort Schlosser. The following year the British took land on both sides of the river from the Senecas. The Stedmans ran the portage peacefully, clearing land round the house, which John claimed had been conveyed to him by the Indians, and operating a profitable saw-mill. His brother, James, brought his wife and three-year-old daughter Susanna over to America to join them in 1764. John also kept his flock of goats on an island above the Falls to be protected from wolves. Sadly all but one of them died in the fierce winter of 1779/80. In 1796 John moved west across the river to Canada with the British garrison and soon after returned to England. In 1801 he petitioned the Legislature to confirm his title to Indian lands “bounded by Niagara river, Gill Creek, and a line extending eastwards from Devil’s Hole to said creek.” His claim was dismissed.

Stedman had become a wealthy man and purchased an estate in Bosbury, The Razes, for himself and Nashend Farm Estate, also in Bosbury, for his brother Philip. John had a place in local society and was made High Sheriff of Herefordshire in 1798. His brother James and his family also returned to England and stayed with him at the Razes for a while but they were back in America when James died in 1809. John died on October 28th 1808, aged 78, and according to the plaque in the Bosbury Church chancel he “lies buried within the iron railings at the east end of this church”. His gravestone is in the churchyard. In his will, made in England in 1786, he left the Razes to his wife and the Nash End farm to his brother Philip. However details of a proposed furniture sale were published in the Hereford Journal of 28th September 1808, a month before his death.

This gold mourning ring was not mentioned in his will
but includes a plaited lock of hair and the words engraved:
John Stedman Esq. obt. 28 Oct. 1808 Aet.77.

There is a postscript to this story. Philip inherited the Razees (with a slight name change) on the death of his brother John’s wife, Anne, in 1816. Neither brother had children and Philip asked his great-nephew Philip Stedman Sparkman, Susanna’s son and James’ grandson, to come back from America and live with him in the mansion and he came to Bosbury in 1817 aged 23. In due course Philip junior married a local girl, Margaret Jackson. Philip senior died at the Razees and was buried in Bosbury churchyard on 1 December 1820. In his will, he left the Nashend Farm to his great-nephew but wanted the Razees to be sold and an income paid to his niece, Susanna, but nothing to her husband, Col. John Sparkman, whom he disliked. Philip junior contested the will and his mother and father returned to England to help claim the inheritance for their son. They lived at the Razees mansion while Philip junior and his wife lived at the Home Farm. The Colonel died in 1825 but Philip and his mother, Susanna, continued with the claim. In support of this, Philip swore an affidavit to explain the position but the legal challenge eventually failed. However, while the legal argument continued, Philip and Margaret continued to live at Home Farm, with their three children, before they moved away from Bosbury. His mother returned to her family in America where she died in 1838.

See also the 1816 ruling on the Stedman land claim