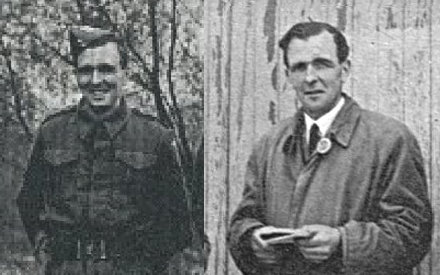 Geoffrey Griffiths was born in Ledbury in the spring of 1914. He came from a farming family whose passion was breeding Hereford cattle. The tradition began with his great-grandfather, Mr. William Griffiths of Aldersend Farm, Tarrington near Ledbury, whose most famous animal was called ‘Starlight’. His herd was sold off on 4th November 1920 raising nearly £50,000.

Geoffrey’s father, Henry Richard Griffiths raised Hereford cattle and he considered his best animal to be ‘Tarrington Broadside’. He was President of the Hereford Herd Book Society in 1941. Hereford cattle were exported to Argentina and in 1943 won several Championships with Tarrington offspring at the Palermo Show including ‘Tarrington Prestige’ the Senior Champion. He died in January 1952 aged 66.

Geoffrey moved to Temple Court, Bosbury and established the Temple Court herd in the late 1930s. He married Mary Bridget and they had four children in Bosbury.

During the war, Geoffrey served with the secret organisation which has been called ‘The Mercian Maquis’. Home Guard members were recruited and Geoffrey became a member of the 202 Bn GHQ reserve, with a group codenamed the ‘Mechach’ patrol based below the ramparts of Wall Hills, a hill fort near Ledbury. Their task was to disappear into their hidden bunker if the Germans invaded and from thids base emerge to carry out sabotage and assasination operations. No-one in the family could be told and it was basically a suicide mission as they were only expected to survive for a matter of weeks after the Germans arrived. The photograph above shows him in uniform presumably when the units were stood down in 1944.

In 1953, a year after his father’s death, he was also made President of the Hereford Herd Book Society and in this year he judged the Hereford classes at the Royal Show held at Blackpool.

He died in 1993 and he and his wife are buried in Bosbury churchyard.