A novelist who immortalised Bosbury in one of her most famous novels. 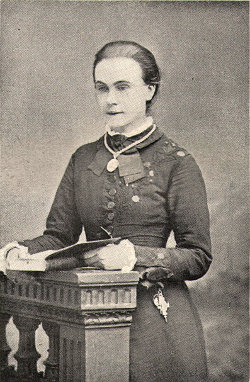 Ellen aged 22 with her first book, ‘Won by Waiting’, from Escreet biography.

Ada Ellen Bayly was not born in Bosbury but she had strong links with the village through her only brother, the Rev. Robert Burges Bayly, who was vicar at Bosbury Holy Trinity church from 1897 to 1906. She was a Victorian novelist more famously known by her pen-name of ‘Edna Lyall’. Her success as a novelist was the result of a combination of the story-teller’s gift with a sincere ethical and religious spirit of Christian tolerance, which at the time was new to many readers.

She was born at 5 Montpelier Villas in Brighton on 25th March 1857, the youngest of four daughters of a barrister. Her father died when she was only 11 and her mother three years later and she was brought up by an uncle, Mr. T. B. Winter, at Caterham in Surrey. She went to school in Brighton. At Eastbourne, where most of her life was spent, she was well known for her philanthropic and political activity. She was a Vice-President of the Women’s Liberal Association. She never married.

Over nearly 25 years, she wrote 19 novels including two children’s books:

The book which was set in Bosbury, “In Spite of All”, first appeared as a play performed at the Devonshire Park Theatre, Eastbourne, in January 1900.

She was described by one interviewer, Ellen Velvin, in Windsor Magazine in 1895: “Edna Lyall is slight and fragile in appearance, with a quiet, restful face, full of expression, kindly thoughtful eyes, firm mouth, a high intellectual forehead, and an abundance of dark brown hair. To strangers she is rather shy and reserved. She is full of sympathy and cheery encouragement, ever ready to give practical help and advice, or to do anything in her power to make things a little brighter for others.”

In 1889 Ellen Bayly was taken seriously ill with pericarditis, and passed her last years as a semi-invalid. She died aged 45 on the 8th of February 1903 at her home in College Road, Eastbourne, of malaria picked up first in Italy about five years earlier. In her will she asked that her body be cremated and the ashes placed at the foot of the old cross in Bosbury Churchyard. Her brother was still vicar here when she died and he arranged for this to be done. The grave has its own cross and on the pedestal is written:

Ada Ellen Bayly
(Edna Lyall)
February 8th 1903
My trust is in the tender mercy of
God for ever and ever.

In Bosbury church there is a screen, at the bottom of which are sections of beautifully carved wood. These were dedicated as a memorial to her.