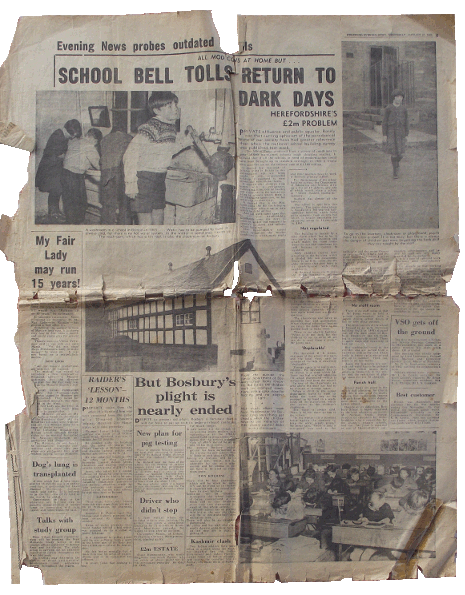 Private affluence and public squalor. Rarely can that cutting aphorism of the paradoxical state of our society have had greater relevance than when the national school building survey survey was published last week.

The White Paper produced from a survey of conditions in some 30,000 maintained schools made shocking reading. It showed that if all the schools in need of modernisation could have been brought up to standard overnight in 1962 it would have cost the nation the colossal sum of £1,368 million.

It showed that thousands of children living in Britain in this technological age are being taught in old, overcrowded buildings ill-equipped to meet present-day educational needs.

It showed that children from homes with a refrigerator, washing machine, central heating and a new car in the garage are going to schools where there is no waterborne sanitation, no hot water and no electricity.

It showed that in the Midlands alone the bill for bringing sub-standard schools up to date would be £136 million.

And last week came news that it will cost Herefordshire £2,000,000 over the next 15 years to replace and remodel the county’s outdated and inferior school buildings.

One Herefordshire school which epitomises the inferior conditions in which many pupils and their teachers have to work is Bosbury primary school.

For the purposes of the school building survey, the Department of Education and Science drew up a list of 13 defects, any one of which would place a school in “below modern standards” category.

Bosbury has almost all the defects.

The school is split into two sections. The junior department is housed in a 300-year-old half-timbered building which looks quite romantic from outside but which is totally unsuitable for educating seven to 11-year-olds in 1965.

The building is heated by a coke stove which has to be lit very early in the morning and which makes the room sometimes too hot and sometimes too cold because it cannot be regulated.

Sixty children receive their schooling in the building, which is divided into two classrooms. There is so little room for the older children that they have to sit cheek-by-jowl with their neighbours.

Mr Bernard Jones, the 43-year-old Welsh headmaster of the school told of some of the difficulties brought about by the cramped conditions.

”It is not so bad for lessons where we don’t need to use materials but when we want to do painting or modelling it is chaotic because there just isn't the room.” In the other classroom, the younger children are given more room because the nature of their lessons demands it. But here again conditions are hardly spacious.

The classrooms also serve as assembly hall and gymnasium. When physical education lessons are taken the desks have to be pushed back to make room.

There is no electric lighting. “When it is too dark for the children to see to write all we can do is read them a story,” Mr Jones said.

The Reverend D. E. Green, chairman of the school managers and the local vicar, said he considered the lack of electricity “deplorable.”

Storage space is virtually non-existent. PE equipment has to be stored in a shed which Mr Jones has had erected adjoining the school playground - which is across the road from the school.

In one of the classrooms an area above the door has had to be utilised as storage space.

When a child in the junior department wants to wash its hands the water has to be pumped up by hand in a washroom off the playground, which also serves as the children’s cloakroom.

The water is always cold. There is no hot water system at the school. 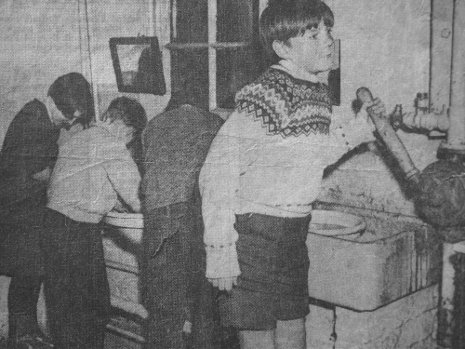 A washroom in a school in Britain in 1965 . . Water has to be pumped by hand. It is always cold, for there is no hot water system. In the winter if sometimes freezes up. The washroom, which has a tin roof, is also the cloakroom at Bosbury.

“In the winter it is a constant battle against the elements to keep the water supply going,” Mr Jones says. “There is only a corrugated iron roof to the washroom and the water freezes up very quickly. I have had the pipes lagged but when I arrive in the morning I sometimes have to start plumbing to get the water on.”

Until last year there was only one pedestal WC for the 30 girls at the school. Mr Jones has now switched the lavatories round so that the girls have three WC’s and the boys one. There is no separate lavatory accommodation for the staff. The building which houses the cloakroom and the school’s fuel store (fuel has to be carried across the road) is affectionately known as “the cowshed.” 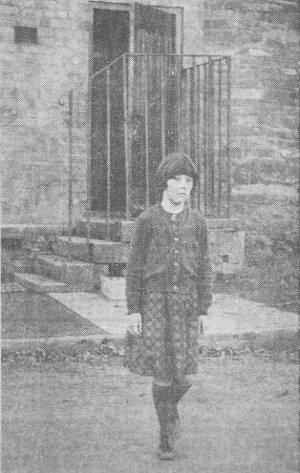 To go to the lavatory, cloakroom or playground, pupils have to cross a road. It is not busy, but there is always the danger of children just once forgetting the kerb drill they are taught by the staff. [The pupil is Susan Preece].

There is no staff room so that if Mr Jones wants to hold a private conversation with a parent during school hours it has to take place outside.

The infant section of the school is housed in an early Victorian building (built in 1848) situated just off the main street of Bosbury. Despite its age, the building is structurally sound. There is more room and electricity is laid on.

But washbasins stand in the corridor and are served from a rainwater tank in the roof which tends to freeze up in winter and dry up in summer. Here, too, there is no hot water.

Again the lavatories are outside and water has to be pumped by hand which means more plumbing headaches in the winter and the restriction of playing space for the 30 children.

School meals are eaten in the parish hall adjoining the church and this is also used for music lessons, For needlework lessons the girls from the junior department have to transfer to the infant school.

“It is a case of splendid work redeeming most unsatisfactory conditions.” The miracle is that working under such conditions Bosbury school achieves the results it does, Mr Jones says, almost plaintively “I am very keen on modern educational methods but how can I put them into practice in these circumstances?”

But as Mr Green said: “This school was built to serve a different age and you can’t expect 20th century premises before the 20th century arrives.”

It is a fair point. But children born into the 20th century surely have a right to expect that amenities of the age should be available to them. 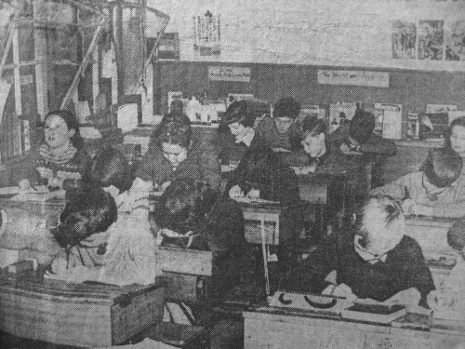 Not much elbow room here. Headmaster Mr Bernard Jones says things get chaotic when the children have to use materials at their closely packed desks in this classroom.

But Bosbury’s plight is nearly ended

DESPITE its present sad plight, Bosbury is fortunate that it will not have to put up with its under-privileged conditions for much longer.

A new school for the village. incorporating many modern conveniences is in the l966-67 school building programme. This means that the present unhappy state of affairs should be at an end within three years.

The present Bosbury cricket ground has been earmarked as the site for the new school. This is likely to cost about £33,000.

Among its features will be a spacious hall, which will be adaptable for use as a gymnasium and for drama. It will not have to be used as classroom space.

There will be four classrooms which will be wired for radio (TV can be wired up in the hall if required)and the school will have its own kitchens.

Sanitation will be dispersed throughout the school instead of being concentrated in one block and so that lavatories serve only two classrooms instead of the whole school.

The present school has no playing ﬁeld but at the new site there will be a one-and-a-half acre recreation area. There will also be an extensive playground.

Mr Jones and his staff and their pupils deserve something better. At last they are in sight of getting it.