Tenant can stay on farm after agreement is reached 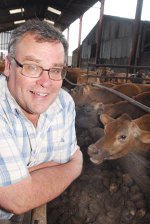 A FARMER from Bosbury is celebrating reaching an agreement allowing him to remain on his farm after a years-long battle over his tenancy.

Ex-serviceman John Barron has been locked in a legal struggle with Herefordshire Council over his tenancy of Beacon Hill Farm for nearly a decade. The farm is owned by the Buchanan Trust, a charity for former servicemen, and administered by the council.

But now an agreement has been reached between the warring parties after mediation conducted by top barrister and charity law specialist Francesca Quint in London last week. The parties met at the International Dispute Resolution Centre in Fleet Street on Thursday, February 3, and came to an agreement after a day of discussion. George Dunn, chief executive of the Tenant Farmers Association, which has supported Mr Barron throughout the dispute, said: “An agreement with the Buchanan Trust has been reached which will allow John to stay on the farm. Details of the agreement remain confidential.

“However, I can say that I’m delighted for John. We’ve been working with him for years, and I’ve seen him at some extremely low points, so it’s great we’ve managed to reach an agreement that secures him on the property.”

Mr Barron said: “It’s fantastic news, it’s a huge weight off my shoulders. This has been going on for years, and it’s great to have put it behind me.”

Mr Barron keeps a herd of Jersey cattle and makes Beacon Hill ice cream, available at Ice Bytes in Ledbury. He is also doing well with mail-order sales of unpasteurised milk, which he sells as far away as John O’Groats in Scotland.