“March 1st, 1840, was my birthday; I was thirty-three years of age. It being Sunday, I preached twice during the day to a large assembly in the City Hall, in the town of Hanley, and administered the sacrament unto the Saints.

In the evening I again met with a large assembly of the Saints and strangers, and while singing the first hymn the spirit of the Lord rested upon me and the voice of God said to me, ‘This is the last meeting that you will hold with this people for many days.’

I was astonished at this, as I had many appointments out in that district.

When I arose to speak to the people, I told them that it was the last meeting I should hold with them for many days. They were as much astonished as I was.

At the close of the meeting four persons came forward for baptism; we went down into the water and baptized them.

In the morning I went in secret before the Lord, and asked Him what was His will concerning me. The answer I got was, that I should go to the south, for the Lord had a great work for me to perform there, as many souls were waiting for the word of the Lord.

On the 3rd of March, 1840, in fulfillment of the directions given me, I took coach and rode to Wolverhampton, twenty-six miles, and spent the night there.

On the morning of the 4th I again took coach, and rode through Dudley, Stourbridge, Stourport, and Worcester, then walked a number of miles to Mr. John Benbow’s, Hill Farm, Castle Frome, Ledbury, Herefordshire. This was a farming country in the south of England, a region where no elder of the Latter-day Saints had visited.

I found Mr. Benbow to be a wealthy farmer, cultivating three hundred acres of land, occupying a good mansion, and having plenty of means. His wife, Jane, had no children.

I presented myself to him as a missionary from America, an Elder of the Church of Jesus Christ of Latter-day Saints, who had been sent to him by the commandment of God as a messenger of salvation, to preach the gospel of life to him and his household and the inhabitants of the land.

Mr Benbow and his wife received me with glad hearts and thanksgiving. It was in the evening when I arrived, having traveled forty-eight miles by coach and on foot during the day, but after receiving refreshments we sat down together, and conversed until two o’clock in the morning.

Mr. Benbow and his wife rejoiced greatly at the glad tidings which I brought unto them of the fullness pf the everlasting gospel, which God had revealed through the mouth of His Prophet, Joseph Smith, in these last days.

I also rejoiced greatly at the news that Mr. Benbow gave me, that there was a company of men and women - over six hundred in number - who had broken off from the Wesleyan Methodists, and taken the name of United Brethren. They had forty-five preachers among them, and had chapels and many houses that were licensed according to the law of the land for preaching in.

This body of United Brethren were searching for light and truth, but had gone as far as they could, and were calling upon the Lord continually to open the way before them, and send them light and knowledge, that they might know the true way to be saved.

When I heard these things I could clearly see why the Lord had commanded me, while in the town of Hanley, to leave that place of labor and go to the south; for in Herefordshire there was a great harvest-field for gathering many saints into the Kingdom of God. I retired to my bed with joy after offering my prayers and thanksgiving to God, and slept sweetly until the rising of the sun.

I arose on the morning of the 5th, took breakfast, and told Mr. Benbow I would like to commence my Master’s business by preaching the gospel to the people.

He had in his mansion a large hall which was licensed for preaching, and he sent word through the neighborhood that an American missionary would preach at his house that evening.

As the time drew nigh, many of the neighbors came in, and I preached my first gospel sermon in the house. I also preached on the following evening at the same place, and baptized six persons, including Mr. John Benbow, his wife, and four preachers of the United Brethren.

I spent most of the following day in clearing out a pool of water and preparing it for baptizing in, as I saw many to be baptized there. I afterwards baptized six hundred persons in that pool of water. 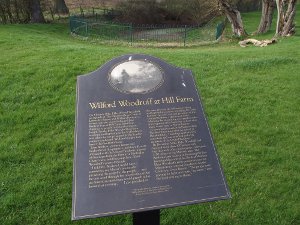 On Sunday, the 8th, I preached at Frome’s Hill in the morning, at Standley [Stanley] Hill in the afternoon, and at John Benbow’s, Hill Farm, in the evening.

The parish church that stood in the neighborhood of Brother Benbow’s, presided over by the rector of the parish, was attended during the day by only fifteen persons, while I had a large congregation, estimated to number a thousand, attend my meetings through the day and evening.

When I arose to speak at Brother Benbow’s house, a man entered the door and informed me that he was a constable, and had been sent by the rector of the parish with a warrant to arrest me.

I asked him, ’For what crime?’

He said, ’For preaching to the people.’

I told him that I, as well as the rector, had a license for preaching the gospel to the people, and that if he would take a chair I would wait upon him after meeting.

He took my chair and sat beside me. I preached the first principles of the everlasting gospel for an hour and a quarter . The power of God rested upon me, the Spirit filled the house, and the people were convinced.

At the close of the meeting I opened the door for baptism, and seven offered themselves. Among the number were four preachers and the constable.

The latter arose and said, ’Mr. Woodruff, I would like to be baptized.’

I told him I would like to baptize him. I went down into the pool and baptized the seven. We then met together. I confirmed thirteen, and broke bread unto the Saints and we all rejoiced together.

The constable went to the rector and told him that if he wanted Mr. Woodruff taken up for preaching the gospel, he must go himself and serve the writ, for he had heard him preach the only true gospel sermon he had ever listened to in his life.

The rector did not know what to make of it, so he sent two clerks of the Church of England as spies, to attend our meeting, and find out what we did preach.

But they both were pricked in their hearts and received the word of the Lord gladly, and were baptized and confirmed members of the Church of Jesus Christ of Latter-day Saints.

The rector became alarmed, and did not dare to send anybody else.

The ministers and rectors of the South of England called a convention and sent a petition to the Archbishop of Canterbury, to request Parliament to pass a law prohibiting the “Mormons” from preaching in the British dominion.

In this petition the rectors stated that one “Mormon” missionary had baptized fifteen hundred persons, mostly members of the English Church, during the past seven months.

But the Archbishop and council, knowing well that the laws of England gave free toleration to all religions under the British flag, sent word to the petitioners that if they had the worth of souls at heart as much as they valued ground where hares, foxes, and hounds ran, they would not lose so many of their flock.

I continued to preach and baptize daily. On the 21st day of March I baptized Elder Thomas Kington. He was superintendent of both preachers and members of the United Brethren.

The first thirty days after my arrival in Herefordshire, I had baptized forty-five preachers and one hundred and sixty members of the United Brethren, who put into my hands one chapel and forty-five houses, which were licensed according to law to preach in.

This opened a wide field for labor, and enabled me to bring into the Church, through the blessings of God, over eighteen hundred souls during eight months, including all of the six hundred United Brethren except one person; also including some two hundred preachers of various denominations. This field of labor embraced Herefordshire, Gloucestershire, and Worcestershire, and formed the conferences of Garway, Gadfield Elm [Redmarley], and Frome’s Hill.

I was visited by President Young and Dr. Richards.”

On the 14th of April, 1840, Elder Woodruff records the ordination of Willard Richards to the apostleship. Two days later the Twelve, in council, voted to publish a Church periodical in Great Britain. Elder Woodruff proposed that it be called the Millennial Star, and it was so named.†

“Brother Benbow furnished us with £300 to print the first Book of Mormon that was published in England: and on the 20th of May, 1840, Brigham Young, Willard Richards, and I held a council on top of Malvern Hill, and there decided that Brigham Young go direct to Manchester and publish 3,000 copies of the Hymn Book and 3,000 copies of the Book of Mormon, this being the first publication of these books in England.

The power of God rested upon us and upon the mission. The sick were healed, devils were cast out, and the lame were made to walk.

One case I will mention: Mary Pitt, who died later in Nauvoo, sister of William Pitt, who died in Salt Lake City, had not walked upon her feet for eleven years. We carried her into the water, and I baptized her.

On the evening of the 18th of May, 1840, at Brother Kington’s house in Dymock, Elders Brigham Young, Willard Richards, and I laid hands upon her head and confirmed her. Brigham Young being mouth, rebuked her lameness in the name of the Lord, and commanded her to arise and walk. The lameness then left her, and she never afterwards used a staff or crutch. She walked through the town of Dymock next day, which created a stir among the people; but the wicked did not feel to give God the glory.

The whole history of this Herefordshire mission shows the importance of listening to the still small voice of the Spirit of God, and the revelations of the Holy Ghost.

The Lord had a people there prepared for the gospel. They were praying for light and truth, and the Lord sent me to them, I declared the gospel of life and salvation, some eighteen hundred souls received it, and many of them have been gathered to Zion in these mountains. Many of them have also been called to officiate in the bishopric, and have done much good in Zion. But in all these things we should ever acknowledge the hand of God, and give Him the honor, praise, and glory, forever and ever. Amen.